Certified Gold Partner for over 20 years

Do any of these statements sound familiar to you? Multiple developers working on multiple projects – some of them related – in multiple languages that need to be released at different times:  these are all challenges that Azure DevOps and Team Foundation Server can help you meet.

From idea to release 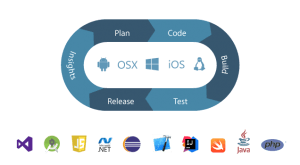 Azure DevOps and Team Foundation Server (TFS) are a collection of software development tools that allow the entire team to work together to on the entire lifecycle, from planning to release to insight gathering.

Both products have the same set of tools – the only difference is that Azure DevOps is hosted in Microsoft Azure, while TFS is hosted on-premises.

These tools are available for teams of any size – small teams as well as enterprises. Even sole developers can use either platform to manage their software and deploy their apps.

With this suite of tools, you can

Actions in your pipeline can be triggered from changes to your code or any number of alert criteria. You can build and deploy on your own infrastructure or free Microsoft-hosted Linux, macOS, and Windows agents. Cloud-based load testing lets you test your infrastructure with as much load as you’d like.

How can B2B help?

At B2B Technologies, we can